a. (Introduction, p. 10) Besides toying with the promise and pitfalls of technological determinism – or the idea of the Europeanized nation-state as an artefact of the printed book – Marshall McLuhan was an enthusiastic and assiduous reader of Joyce’s Finnegans Wake. In The Gutenberg Galaxy (1962) he described it as ‘an entirely new form of expression’ designed ‘to capture the complex interplay of factors’ that underpinned his own central thesis, namely, that ‘print and nationalism are axiological or co-ordinate, simply because by print a people sees itself for the first time’ (246-47). He also traced his own critique of the way the ‘West’ privileges the visual, at the expense of the ‘audile-tactile’, back to Joyce and understood the Wake as a revolutionary experiment in writing designed to awaken the ‘mesmerized and homogenous servants’ of print and the nation from their ‘Night’ (297-98). In War and Peace in the Global Village (1968), which McLuhan co-produced with the graphic designer and inventive book artist Quentin Fiore, he used extensive quotations from the Wake as a gloss on his own text. As the blurb puts it, the ‘marginal quotes’ are ‘a tribute to the man who was first to write about the electrical retribalization of the West.’ War and Peace, which focuses on the propensity of the new media to fuel violence and division, is a less sanguine appraisal of the electronic age than Gutenberg Galaxy. The rise of the internet in the 1990s saw a revival of McLuhanite technological utopianism perhaps best exemplified by John Perry Barlow’s ‘Declaration of the Independence of Cyberspace‘ (1996) which articulated a new anti-statist vision of a digital ‘Republic of Letters’. As Timothy Garton Ash shows in Free Speech: Ten Principles for a Connected World (2016) that dream did not survive the first decades of the new century when corporate and then state interests began to refashion and in some cases re-nationalize the web for their own commercial and political purposes. For a summary account of my own take on Finnegans Wake and the modern state, see Fourth Proposition. (I have cited the 2011 Toronto University Press edition of The Gutenberg Galaxy and the 2001 Gingko Press edition of War and Peace here.)

c. (Introduction, p. 20) The first image below shows the statue of the enthroned, book-bearing King James I (1566-1625) on the tower on east side of the Bodleian Quad in Oxford. James is flanked by figures representing fame on his right and the university on his left. The second shows the inscription bearing Sir Thomas Bodley’s (1545-1613) initials above the main entrance on the west side. The Quad was completed in 1619. The translations of the inscriptions come from Reginald H. Adams, Latin Inscriptions in Oxford (Oxford: Bodleian Library, 2015), 3-4. As Adams notes, ‘Republic of Letters‘ can also be translated as ‘the commonwealth of the educated or learned’.

e. (Chapter 1, p. 37) Paper always has a story to tell. In the case of Matthew Arnold’s ‘Culture and its Enemies‘ (1867), the last lecture he gave as Oxford Professor of Poetry, the sheets on which he drafted the manuscript say something about the circles in which he was moving and the roles he was juggling at the time. They also cast a new light on his defence of classical culture and state-sponsored national Bildung. As the manuscript images below reveal, he began writing on official Education Department stationary and then switched to paper bearing the embossed letterhead of the Anthenaeum, the prestigious London club to which he and his chosen adversary John Bright both belonged. A private members’ club founded in 1824, the Athenaeum was, and still largely is, for eminent men of ‘science, literature or the arts’ – it first admitted women as equal members in 2002. In Ancient Athens, the Athenaeum was a temple in which poets, philosophers and orators met to read and discuss their work.

Portico of the Athenaeum

Mosaic with Athena in Greek

Like Literae Humaniores, nineteenth-century Oxford’s flagship undergraduate course, which Arnold studied at Balliol College in the early 1840s, the club embodied the classical ideals he espoused and the nineteenth-century elite generally shared – hence the provocative force of Bright’s comments about ‘a smattering of the two dead languages of Latin and Greek’. As the statue above the main portico, the mosaic flooring, and the embossed letterhead indicate, it was named in honour of the Greek goddess Athene, and the palatial clubhouse on Pall Mall in London, completed in 1827, was designed in the neoclassical style. Like many such buildings scattered across the globe (see a and b), it gives architectural expression to a once dominant way of thinking interculturally: treating one culture, or idea of that culture, as standard-setting and making its forms and ideals a definitive part of your own (see Fifth Proposition). As the various changes to first sentence of the manuscript show, Arnold initially called Bright ‘that famous orator’, before considering ‘tried and famous’ and then opting for ‘famous liberal’, giving a greater centrality to his party-political affiliation. In the final published version he calls him ‘that fine speaker and famous Liberal’.

g. (Chapter 1, p. 44) The following image shows James Murray’s notes on the word ‘orange’ for the lecture series on ‘English Words’ he gave to undergraduates studying English at Oxford in 1911:

h. (Chapter 1, p. 49) To emphasize the fact that the English word ‘plunder’ is borrowed from German (plundern, literally ‘to rob a household of its furnishings’), the British Council film on the ‘History of the English Language’ (1943) included the following cartoon image. To see the film, click here.

i. (Chapter 2, p. 98) For an Excel spreadsheet detailing the contributors to T.S. Eliot’s Criterion, click here: Criterion contributors list. I am grateful to Charne Lavery for compiling this census.

j. (Chapter 3, p. 113) The following image shows the ‘Proclamation’ as it appeared in Eugene Jolas’s little magazine transition (16-17) in June 1929. For more details, click here and for an account of the genre of the manifesto, see Martin Puchner, Poetry of the Revolution (2005). The ‘Proclamation’, which Puchner does not discuss, both confirms and challenges some of his central claims. If it combines ‘performative intervention’ with ‘theatrical posing’ (5) on the part of an artistic collective – characteristic features of the genre – it does not succeed in turning the Wake into an instance of what Puchner calls ‘manifesto art’ – ‘an art forged in the image of the manifesto’ (6). As I argue in the book, the mismatch between Joyce’s project and Jolas’s is more telling than any real or imagined convergences, not only because it highlights the tensions between collective and individual endeavours within avant garde groups but because it exposes the gulf between the manifesto as a genre and individual acts of writing. Conspicuously Joyce is not among the signatories to the ‘Proclamation’.

k. (Prologue to Part 2, p. 156) Group of experts convened to advise on UNESCO’s Fundamental Education programme in 1947 under the general direction of Julian Huxley, H. E. Wilson, and Sir Alfred Zimmern. Zimmern, a fellow Oxford-trained Classicist, had worked closely with Gilbert Murray in the League of Nations. The details come from UNESCO, Fundamental Education: Common Ground for all Peoples (New York: Macmillan, 1947), 263-72. To watch footage of the conference for the establishment of UNESCO in London on 16 November 1945 at which the constitution was first read, click here.

r. (Chapter 5, p. 192) Afrikaans student marginalia from the 1972 school edition of F. A. Venter‘s Swart Pelgrim (1958). The notes say: ‘I like this book a lot. It shows me how the Bantu live and how much they love their families. And how they want to be like whites.’

s. (Chapter 7, p. 229) The front matter and Arvind Krishna Mehrotra’s editorial ‘statement’ from damn you 6 (1968), p. 1. For a PDF of all six issues of damn you, click here: damn you 1-6. The magazine is part of the collection of Mehrotra’s papers held at The Rare and Manuscript Collections Carl A. Kroch Library, Cornell University, Ithaca, New York, USA. YouTube interview: Mehrotra discusses the fate of Indian languages with Souradeep Roy (August 2018); YouTube interview: Mehrotra discusses Kabir with Souradeep Roy (September 2018). 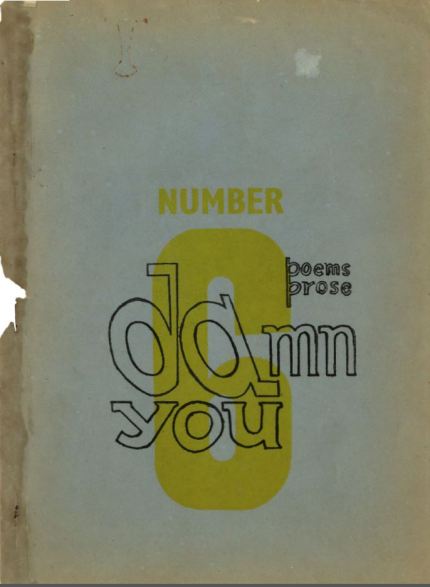 t. (Chapter 7, p. 241) The front and back covers of Arun Kolatkar’s Jejuri (1976) in its original Clearing House edition designed by Kolatkar himself. The ‘religious’ front cover depicts Khandoba, the Hindu god celebrated in the pilgrimage town of Jejuri in the western state of Maharashtra; while the ‘secular’ back cover is based on ‘the setting sun’, the final poem in the sequence called ‘The Railway Station’, which describes the sun touching ‘the horizon/at a point where the rails/like the parallels of a prophecy/appear to meet.’ Clearing House was a Bombay-based writers’ publishing collective. Image reproduced by permission of Adil Jussawalla. For a further account of Kolatkar and his context, see Anjali Nerlekar, Bombay Modern: Arun Kolatkar and Bilingual Literary Culture (Northwestern University Press, 2016); and Laetitia Zecchini, Arun Kolatkar and Literary Modernism in India (Bloomsbury, 2014). 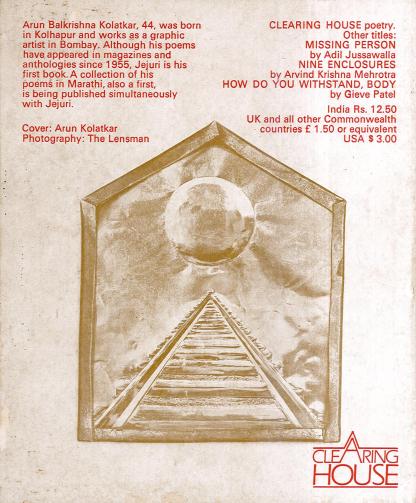 u. (Chapter 8, p. 244) Marginal notes on p. 101 of Rushdie’s The Satanic Verses (1988) faxed by the Islamic Foundation based in Leicester in the UK to Muslim organisations around the world, now among the archives of the apartheid censors in South Africa: see file P88/10/144, Directorate of Publications, Western Cape Provincial Archives and Records, Cape Town, South Africa. To see a PDF of all the marginal notes on the fax, which is dated 21 October 1988, click here: Verses marginalia. For more on the ‘Rushdie Affair’, see The Literature Police (Oxford, 2009), especially the Postscript, and Anshuman A. Mondal, Islam and Controversy (Palgrave, 2014), especially Chapter 4.

v. (Chapter 8, p. 256) The following image shows the charcoal self-portrait entitled ‘Ulysses’ (1988) by the Indian Expressionist painter F. N. Souza that provided part of the inspiration for Amit Chaudhuri’s Odysseus Abroad (2014). For Chaudhuri’s reflections on this, and on the process of writing, see ‘The Moment of Writing‘, the Paris Review, 10 May 2018; and for more on Souza and his generation, see Ratik Asokan, ‘The Modern Art of Independent India‘, NYRDaily, January 2019. To hear Chaudhuri reflect on the phrase ‘my people’ and the question of categories in ways relevant to the discussion in this chapter, click here.

w. (Chapter 8, p. 260) A classically-trained Indian singer, Chaudhuri has a parallel career as a musician in which he has developed other ways of hovering between cultures without firmly settling down one way or the other, or seeking to achieve some kind of fusion. In the piece that follows, which is entitled ‘The Layla riff to Todi’, he moves musically between Eric Clapton’s ‘Layla‘ and the classical raga Todi, keeping both in play without according either a prior or normative status, much as he keeps the legacies of Tagore and Joyce alive in Odysseus Abroad while nonetheless producing a work entirely his own. The track comes from Chaudhuri’s first album This is not fusion (2010).

x. (Postscript, p. 265) The following images relate to Xu Bing’s 天书/ Tiānshū or Book from the Sky (1988). The first shows the complete installation with Buddhist sutras or scrolls hanging from the ceiling, over a hundred traditional paper-bound and thread-stitched books, neatly set out across the gallery floor, and modern poster-style newspapers covering the walls. The second contains examples of the pseudo-characters used throughout, and the third shows the woodblocks on which they were originally carved. For a guide to Xu Bing’s oeuvre, click here.

z. (Postscript, p. 268) The following images show various aspects of Xu Bing’s Book from the Ground (2007-) in its book version from the cover to the initial inside pages. For more on the project and to buy the book, click here.