“Aside from being a beautiful thing in itself, knowledge generates many different types of rewards, from productive use of inventions to the creation of new bonds among people who interact with each other.” Amartya Sen, Infosys Address, January 2020, Bangalore, India.

1. Rabindranath Tagore’s landmark 1907 essay “বিশ্ব সাহিত্য” (“Vishva Sahitya” in Roman script and “World Literature” in English) has not fared well in the US-dominated world of contemporary literary studies. In his anthology World Literature in Theory (2014), which includes Swapan Chakravorty’s 2001 translation of the essay, David Damrosch describes it as a “path-breaking” statement that “speaks of the universal values that world literature can embody” (6). In a similar but more critical vein, Pheng Cheah cites it in the epilogue to What is a World? (2016), setting it up, like Damrosch, alongside Goethe’s 1827 pronouncements on Weltliteratur, as a parallel non-Euro-American formulation of what he calls “the older vision of world literature as the expression of universal humanity” (310). 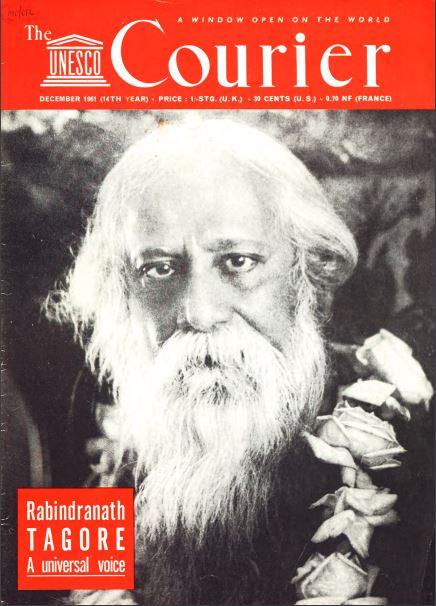 1.1 There is much in Chakravorty’s 2001 translation that makes such claims understandable, not least his version of Tagore’s concluding sentence: “It is time we pledged that our goal is to view universal humanity in universal literature by freeing ourselves from rustic uncatholicity; that we shall recognise a totality in each particular author’s work, and that in this totality we shall perceive the interrelations among all human efforts at expression” (Tagore Selected Writings 150). Yet to take this as a straightforward articulation of Tagore’s concept of world literature not only ignores the promise and perils of translation: it misses at least two key elements of Tagore’s thinking both of which reflect his partly Buddhist-inspired wariness of conceptualization as such.

2. The first concerns his idea of literature. “We do not properly understand literature (sahitya),” Tagore notes at one pivotal point in his discussion, “if we reduce it to place-time-pot (desh-kāl-pātra)” – pātra could also be “vessel” or “individual/person”, and so single author (Tagore Rabindra Rachanabali 771). Chakravorty gives the whole sentence as “literature is not viewed in its true light if we see it confined to a particular space and time,” making it plausible to see the compound desh-kāl-pātra as something like “context” in English (147–8). Yet why limit translation to a search for linguistic correspondences or even rough equivalents – or, conversely, to an affirmation or acceptance of the untranslatable? Is it not sometimes more productive, linguistically, intellectually and culturally, to extend the expressive capacities of the target via the source language, creating a new English compound in this case? Considering the very long history of loans and calques, such transformative movements are after all part of the ordinary life of languages (see ‘Beyond the magic circle’ post).

2.1. As it happens, the creative potential of such movements was central to Tagore’s understanding of translation. Indeed, by marking the particular, Bangla-inflected character of his thinking, the foreignizing neologism “place-time-pot” highlights an important feature of his interlingual practice as a writer, while also reflecting the intercultural ideals he championed as an educationalist. For Tagore, literary creativity is above all an act of resistance directed against all forms of containment and reification, including the conceptual kinds many varieties of literary criticism and academic scholarship favour either actively or by default. So if literature cannot be reduced to “place-time-pot” – say, the historicist’s curatorial object – neither can it be seen merely as a “constructed artefact” – say, the formalist’s well-wrought urn – because it constitutes “a world” (ekti jagat), the creative potential of which is, says Tagore, “like the material world,” always “ongoing” and “incomplete” (772).

2.1.1. Why is this? Because, as he explains in the opening paragraphs of the essay, it is an expression of “ananda” (“joy” or “delight”). This has two important consequences. First, it sets literature apart from the sphere of calculating rationality, which Tagore associates with an arrogant will to power over others, and from the sphere of practical necessity or need, which he also links to power though this time over the environment – “water, air, and fire” become “our unpaid servants” (Tagore Selected Writings 138). Second, and conversely, seeing literature as an expression of ananda connects it to a wide range of other seemingly gratuitous or superfluous everyday activities, from the elaborate rituals of a wedding ceremony to the needless theatricality of warfare. These are also manifestations of “man’s excess (prachurya), his wealth (aisharya), that which overflows all his need” and, for that matter, all forms of rationalistic calculation whether political, economic or, indeed, literary-critical (769). As Supriya Chaudhuri puts it, literature for Tagore is “a movement of affect which binds human beings together” (84). It is partly because of this affective overflowing that it cannot be contained within a “place-time-pot.”

3. The second key element of his thinking concerns his idea of the world. Here the difficulties have less to do with translation as such than with the many unattributed allusions to the Bangla literary traditions that permeate the essay. When it comes to his understanding of the world, the principal figure is the medieval bhakti poet Chandidas and the main point of reference is the song Jeanne Openshaw translates as follows:

Tagore echoes the second two lines when explaining the “connection” (Chakravorty has “bond”) ananda creates: “It is when we know the other as our self and our self as other,” or, as Chakravorty has it, “it is nothing but knowing others as our own, and our selves as others” (Rabindra Rachanabali 763; Selected Writings 139). Again, Tagore contrasts this with the connections rationality, particularly political rationality, fashions – it is “like the bond between the hunter and his prey” – and with the alliances required to satisfy basic needs – he mentions “the English trader” who “once secured his aims by bowing to the Nawab” but “eventually ascended to the throne himself” (Selected Writings 138).

3.1. Political and economic domination over others drive both these forms of connectedness. Whereas, when it comes to the ties created in a spirit of ananda, the self and the other are both undone in a process of reciprocal transformation that involves simultaneously reaching out and embracing the foreign, on the one hand, and turning inward, discovering the foreign within, on the other. Later in the essay, Tagore echoes Chandidas’s first two lines: “the heart is constantly at pains to find the world in our self and our self in the world,” which Chakravorty renders as “the heart’s longing to make the world its own and itself the world’s” (Rabindra Rachanabali 767; Selected Writings 144). Crucially, for Tagore, “the world” in this context is neither a geographical space nor a determinate set of universal values: it is an aspiration toward an ever greater understanding of and feeling for interconnectedness which, like the creative potential of literature, is always in the making, never complete. For this he took his cue as much from Chandidas as from the itinerant Bāul singers of Bengal whose vagabond, quasi-anarchic humanism shaped his own self-understanding as a poet and his ambitions as an educationalist (see Chapter 4 of the book). Hence the name he gave the university he founded in Shantiniketan in 1921: Vishva Bharati which, as Dutta and Robinson explain, is “a compound made from the Sanskrit word for universe [or world] and Bharati, a goddess in the Rig Veda associated with the Hindu goddess of learning, Saraswati” (literally “world-learning,” 220).

4. With these two key elements of his thinking in mind, we can return to the sentence with which he concludes the essay, retranslating it as follows: “The time has come to try to free ourselves from narrow parochialism [or village-provincialism] and to aim to see the World-Man (vishva-manab) within world literature; to find in the works of particular writers [recall one meaning of pātra] a whole, and in that whole the interrelations among all forms of human expression” (Rabindra Rachanabali 773). Importantly, the “whole” may, on this formulation, be a consequence of the writer’s own creativity – the relations she actively produces in each work – or simply an effect of the medium she chooses to adopt – the relations already embedded in the novel form, say, or the English language. As importantly, for Tagore this understanding of world literature as an intercultural aspiration has nothing to do with reified values of any kind, whether “universal” or “cosmopolitan,” or, indeed, with simple oppositions or choices between “nationalism/cosmopolitanism” and “provincialism/universalism.” Nor is it viable on this model to see world literature merely as an effect of translation and circulation understood in historical, economic, geographical or cultural terms. Encountering the world in Tagore’s sense via literature in his sense is about the way we experience the ongoing creative potential of each individual work as an intercultural effort on the writer’s part in the first instance to remake the self and the other, the indigenous and the foreign, in an open-ended, superfluous, even gratuitously wasteful spirit of ananda. This why he offered his anti-concept Vishva Sahitya as an alternative to what he called in a doubly self-distancing gesture “Comparative Literature” – he used the English phrase – which left too much securely in place (Rabindra Rachanabali 771; Selected Writings 148).

Special thanks to Rosinka Chaudhuri for her re-translations of Tagore, and to Laetitia Zecchini and Ranjit Hoskote for permission to use the page from The Indian PEN.

Chaudhuri, Supriya. “Singular Universals: Rabindranath Tagore on World Literature
and Literature in the World.” In Tagore: The World as his Nest. Ed. Subhoranjan Das
Gupta and Sangeeta Datta. Kolkata: Jadavpur UP, 2016, 74–88.

Openshaw, Jeanne. Seeking the Bāuls of Bengal. Cambridge: Cambridge UP, 2002.