1. For all his openness to the unpredictable, James Joyce could never have imagined that the word ‘googling’, one of many he coined in Finnegans Wake (1939, p. 231), would become an everyday intransitive verb describing an action he always dreamed his most idiosyncratic book might conjure into being: ‘To use the Google search engine to find information on the internet.’ The OED dates this sense to 1998, the year Google was launched, suggesting the founders may have derived it from the noun ‘googol’ — ‘a fanciful name (not in formal use) for ten raised to the hundredth power’, dating from 1940. Google was, in other words, conceived as a gateway to the oceans of information on the internet — hence ‘googling’, the act of searching their vast digital expanse, following countless interconnecting currents wherever they flow.

2. Googling in this sense led S M Mahfuzur Rahman, a lecturer in the Department of English and Humanities at the University of Liberal Arts Bangladesh, to ‘Creative Abcedmindedness‘, a talk I gave on Finnegans Wake in 2019. He was particularly struck by my discussion of this sequence:

Maass! But the majik wavus has elfun anon meshes.
And Simba the Slayer of his Oga is slewd. (FW, 203)

These sentences are typical not just of the way Joyce re-foreignizes the English language (‘maji’, ‘wavu’, ‘elfu’, and ‘simba’ are all Kiswahili words — meaning, respectively, ‘water’, ‘net’, ‘a thousand’, and ‘lion/warrior’ — ‘Oga’ means ‘boss or chief’ in Yoruba), or of how he toys with the polyphonic potential of the grapheme (‘elfun anon’ becomes ‘a thousand and one’ once you get the Kiswahili cue). Read aloud or silently by readers competent in different languages, the sentences also open up an infinite rabbit-hole, ramifying across an internet (or interwavu) of languages, cultures, and traditions in ways that make the Wake an incitement to googling. Said in a certain accent (or drunken slur) the phrase ‘Simba the Slayer’, for instance, could be misheard as ‘Sinbad the Sailor‘, pointing to One Thousand and One Nights, the classic compilation of Middle Eastern folk tales; then again, switching or mishearing just a few letters, the phrase evokes the Hindu God ‘Shiva the Destroyer.’

3. All this ramifying reminded Rahman of the Nakshi Kantha, the ancient and ongoing tradition of quilt embroidery typically practised by women across rural Bengal, now spanning West Bengal in India and Bangladesh. ‘These stitching-techniques, worked into pictorial prayers (e.g. floral designs, undulating vines, omnipotent deities),’ Rahaman notes in a recent article, ‘have absorbed the batteries of the ages through invasions, settlements, and colonization – from palanquins and peacock-powered boats to bicycles and steam-propelled trains.’ One characteristic example — the Jessore Kantha above and below — was particularly Wake-like, he felt, because it ‘anachronistically plays with a central lotus, paisley patterns, hurricane lantern, earrings, pen, inkpot, umbrella, football, bicycle, Bangla inscriptions, and misspelled English “Hause”.’ 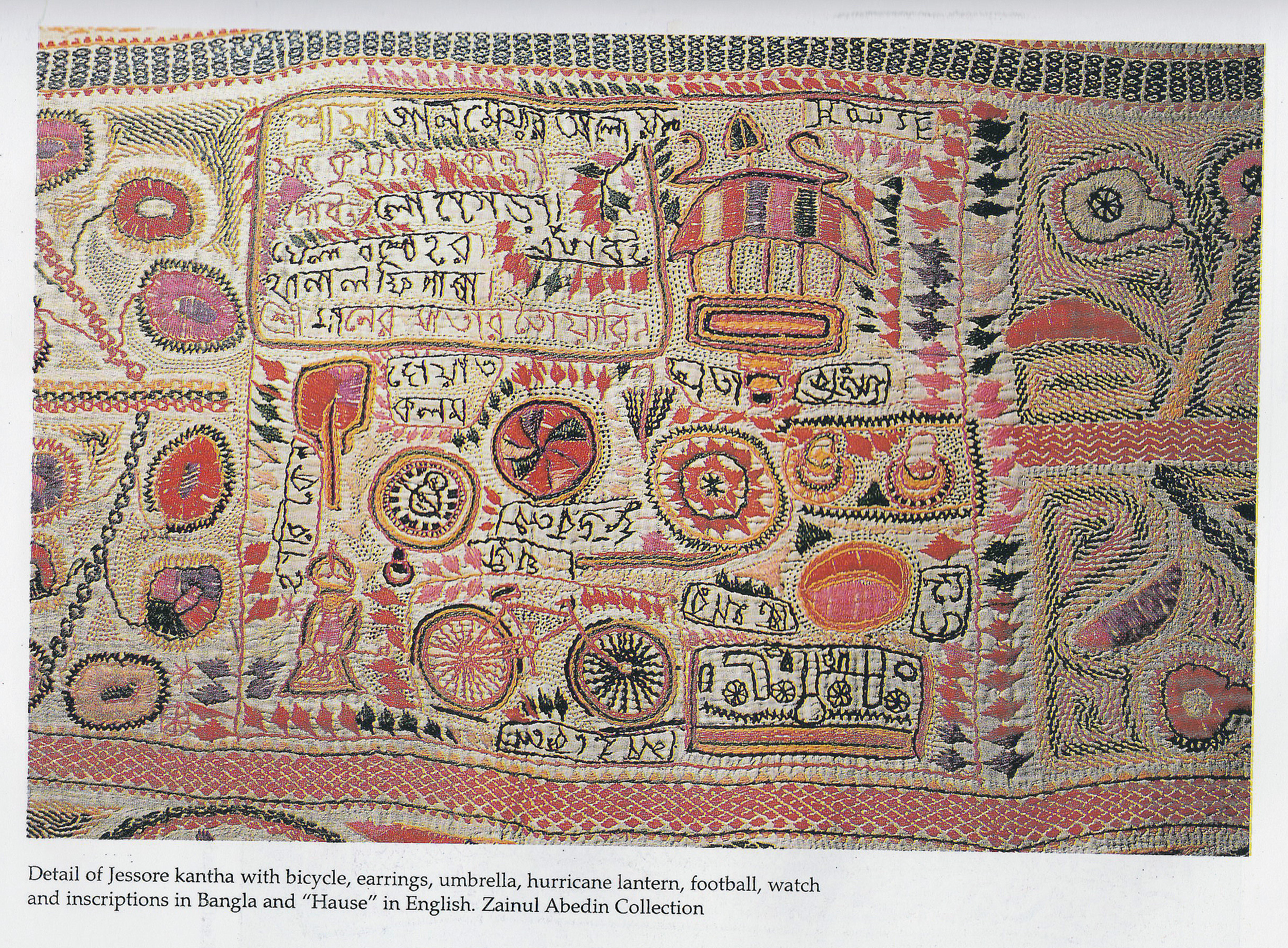 4. Seeing the Wake as a Nakshi Kantha, and vice versa, is a testament to the connectivity and intercultural thinking the internet has made possible in the past two decades. It also opens up the beguiling prospect of a world in which the most extreme artefact of modernist writing to emerge out of Europe in the interwar years shares a set of impulses with an ancient but no less radical — because feminized and marginalized — folk tradition of South Asia. ‘The cacophonous collages in Kanthas emerge from the interplay between chaosophy‘, Rahman comments with a nod to Félix Guattari, ‘and chaosmos — ceaseless creativity trickling down the production of the cosmos that restructures the fascistic State apparatuses from within.’ Or, as the Wake has it, so much escapes the state, and statist thinking, because ‘every person, place and thing in the chaosmos of Alle’ is ‘moving and changing every part of the time’ (FW, 118). It is difficult not to hear Rabindranath Tagore applauding in the background.

My thanks to S M Mahfuzur Rahman for reaching out and for alerting me to his work on the Nakshi Kantha: